How can you call something work when it excites you every morning? Nick Wilson does work at 1618 — he’s the Proprietor after all — but spending time in the front lines is more fun than anything else. OK, fun would be checking in via FaceTime from a cabin in the mountains, but you get the point. His favorite part of the job? Building memories with their clients and walking the line of trendy and traditional while assisting with the creation of a high-end beverage program with the latest and greatest beers, wines, bubbles and high-quality cocktails.
Nick landed in Greensboro for college and loved it so much he never left, finding a permanent home here with his tenured, erudite husband Holt, who deserves endless praise — and probably presents — for allowing Nick to ply his trade during the odd hours of a restauranteur. His belief in community change through philanthropy have earned him the Triad Business Journal 40 Under 40 award, an Action Greensboro Made in Greensboro honoree and the Greensboro Chamber Small Business Person of the Year award. Executive Chef Harrison Simpson’s skill set is as diverse as his hot sauce collection. A near-architect turned engineer turned executive chef with a side degree in accounting, Simpson was also a carpenter at one point in his life.
Constructing palette-pleasing menus is his true passion, however. Simpson is industry trained and developed a deep love of flavor-driven cooking and a passion for growing his knowledge base, spending his free time watching cooking shows and researching recipes. His menus portray overt simplicity set against underlying complexity and are often inspired by whatever ethnic-driven foods he’s recently eaten. Need a conversation starter when you meet him? Ask him about his three kids, specifically his youngest – the only girl – who’s got him wrapped around her pinky. California native. Animal lover. Organization aficionado. OnLocation’s Marie Kondo-approved sales manager Gwen Annese admits a slight obsession with containers, boxes and storage bins. Her mantra – a place for everything and everything in its place! With a background in hospitality sales, accounting and wedding planning, Gwen credits organizational skills as key to her success.
Gwen began her career at 1618 in August of 2021, after working as Sales and Banquet Manager for San Diego’s best Mexican restaurants and a boutique hotel in the area’s Old Town district. There, she developed a passion for direct client sales, all things Dia de los Muertos, and of course, tacos!
Gwen now enjoys the seasons of N.C. with her husband, daughter and 16-year-old cat. Were money no object, she would volunteer full-time and work on craft projects with her daughter. She currently pitches in at the SPCA and Backpack Beginnings, both causes near and dear to her heart. Chin chin! As a 1618 OnLocation Beverage and Events Manager, Danielle Chiasson takes her potables seriously. Her love for delicious drinks started in her teens, when she concocted her own beverage (a cup of coffee with a whole scoop of vanilla ice cream – half beverage/half dessert!) while working at Midtown Cafe and Dessertery in Winston-Salem.
Since then, Danielle has made a science of event beverage stewardship. She knows that fresh lemon and pineapple juices are better than juice from concentrate because citric acid breaks down when it’s frozen. She knows that some of the best wines come from fungicide-free biodynamic viticulture. And she knows that 1618 OnLocation is the best place to make use of her love for libations.
Danielle describes her food personality as “mushroomy.” She loves eating these earthy delicacies, and cites fungi as a great example of the interconnectedness of the world (did you know that underground fungi in the forest can help trees photosynthesize?). True to form, her fridge contains a bottle of 2015 Királyudvar Tokaji Furmint Sec from Hungary and, of course, mushrooms. 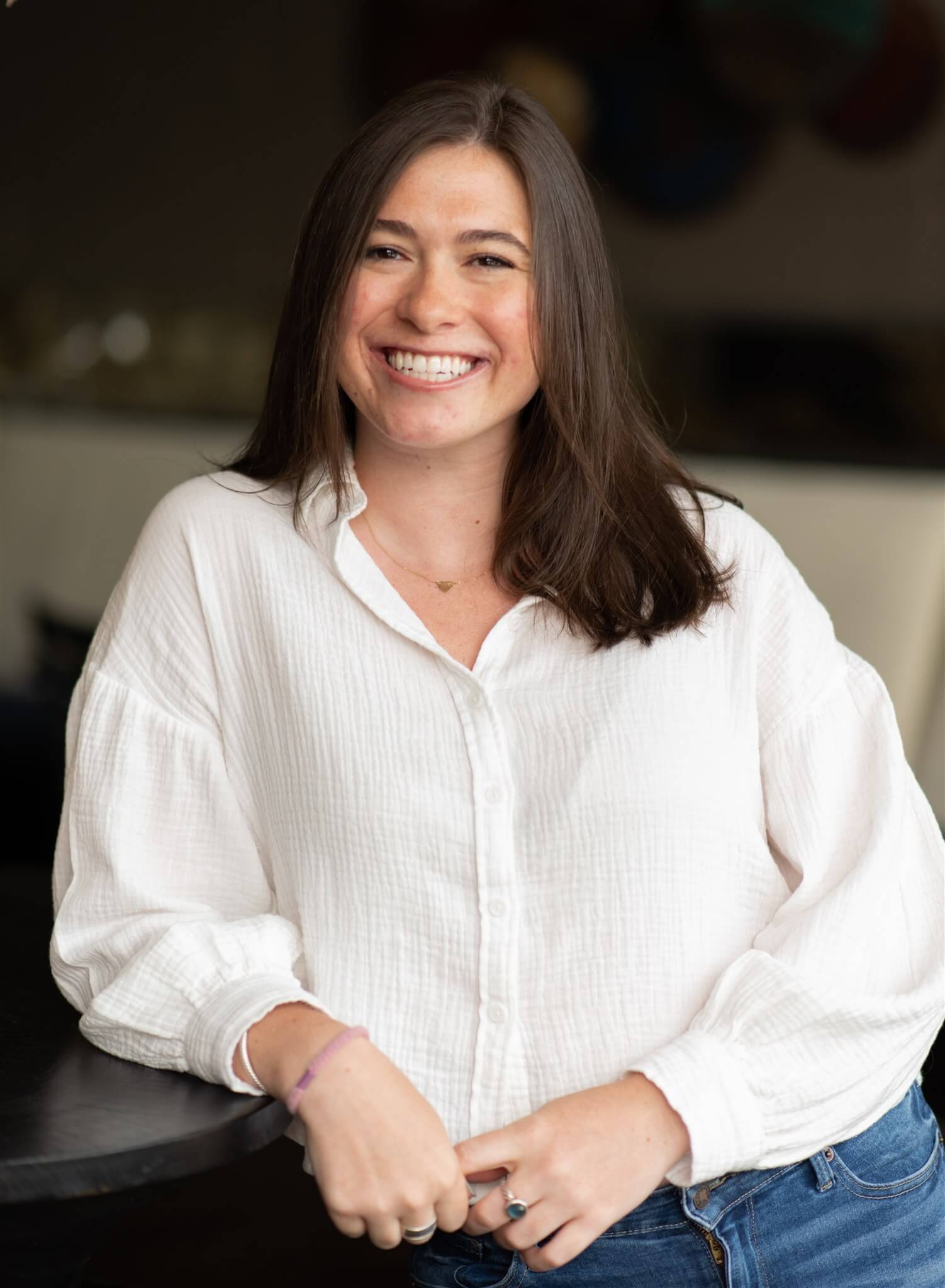 Maddie Barbour knows there’s no place like home. The Greensboro native started in restaurant work as a food runner at Lindley Park Filling Station when she was only 16. Now, following a career as a preschool teacher and a move to San Diego, she’s returned to her roots—both in N.C. and the restaurant business—as a Coordination Manager for 1618 OnLocation.
Maddie’s naturally inviting personality partnered with her love for entertaining and intimate knowledge of the Triad make her a perfect fit as OnLocation’s Coordination Manager. She describes her food personality as a sour gummy worm—like this sweet and sour treat, she strives for an even balance in all aspects of her life.
Her fridge contents reflect her love of balance and diversity, full of fruits and veggies from the farmers’ market, limes for fresh margaritas, and lots of ice cream. In her down time, Maddie loves to bake, travel, and discover new hiking trails with her dog, Blue. The arts of reception and goodwill come naturally for Macie Sheehan, OnLocation’s Event Coordinator. In fact, she studied to be a nurse for three years before applying her nurturing personality and attention to detail to the hospitality industry.
The South Carolina native began her culinary career at Quaintance Weaver’s Lucky 32 Southern Kitchen, where she learned to be guest-focused and fully immerse herself in the food and beverages she serves. She and her husband Aaron joined 1618 together (he serves as Director of Leadership at 1618 West) and the pair have flourished there since 2017.
Macie describes her food personality as a salted caramel brownie—a little sweet and a little salty. Were money no object, you’d find her wrangling her three children on the coast of Maine while eating fresh lobster and drinking whiskey. Her fridge contains leftovers, string cheese and wine, and her hidden talent is making a mean PBJ (for her children and herself!). What’s Aaron Tyler’s favorite part of his job? The Staffing and Event Manager of 1618 OnLocation loves basking in the afterglow of an unforgettable event. To Aaron, looking back on the joy and magic his team brings to clients is confirmation of a job well done.
He grew up in the restaurant industry—his father was the food/beverage director at the local country club and Aaron began flipping burgers and serving beers (yes, beers) in the halfway house at age 14. He honed his skills in event services working with his dad to cater weddings receptions, private parties and corporate events.
Aaron compares himself to the POP of opening a bottle of bubbly—he brings a touch of excitement and sparkle wherever he goes. A man of many hidden talents, he can rap all of Salt-N-Pepa’s “Shoop” from memory, and does a mean rendition of the final dance sequence from “Miss Congeniality.” His fridge contains leftovers, cold brew, oatmilk, and, of course, sparkling seltzer.

Sometimes a career path is determined early in life, as it was for On Location’s Lauren King Donohue, who worked her first catering job while still in high school. That early taste of events and excitement set the stage for a lifetime of adventure in the hospitality industry.
After working in restaurants, bars and catering companies for more than a decade, it’s fitting that she met her husband, 1618 Seafood Grille’s Sous Chef Adam Donohue, at 1618 Midtown, which eventually became the location of their wedding reception.
Lauren loves to bake and entertain in her off hours, and always keeps a bottle of Champagne in the fridge. It’s the kind of habit you want in someone charged with making great events. Says Lauren, “Every single day has the opportunity to be amazing if you have the right bubbles.”

Ellen Moore is a peripatetic soul who made it to Greensboro by way of Miami, Alaska, Slovakia and the Florida Keys. Maybe that’s why she enjoys the tight-knit atmosphere she’s found at 1618, which she describes as mafia-like. “Once you’re in, you’re family.”
She arrived in the gate city via U-Haul in 2013 to attend UNCG’s Sign Language Interpreting Program, a fitting curriculum since she always talks with her hands. Shortly thereafter, she joined 1618 and is proud to say she’s done nearly every job in the restaurant – backwaiting, hosting, serving, bartending and working events – except for cooking. After hours, she can be found crafting with fellow 1618 family member Katy Bromley.